Ever take over a model and rescue it?  I bought this one started from a friend who lost track of how he acquired it.  My guess is that it was part of a collection of models he picked up as an IPMS club president.

I generally shy away from these projects because there is usually a reason something is shelved and sold after it has been started.  However, I had a keen interest in this kit and my quick peek under the lid assured me the “damage” was light:  A few parts snipped;  a few sub assemblies glued; the gluing was well done; no primer or paint had been applied.  Truth be told, whoever started it didn’t do anything wrong.  Actually he or she did as good a job as I could have done.

Unlike other rescues that turned out to be more trouble than worth, in this case it looked like time saved and a discount on the kit!  When does that happen?

Ok – first of all, this thing is BIG! The Betty may be a twin engine bomber but when compared to another twin engine planes like the Nick or the Gekko, this thing looks more like a Flying Fortress.  This twin is going to leave a hefty footprint in your display case – but due to the interesting finish, it will leave an impression as well.

The kit is fairly simple too.  It has remarkably few parts and assembles very easily.  The previous builder started the cockpit and the engines.  There is an excellent amount of detail in the cockpit and is easily painted, hightlighted and shaded.

The cockpit was quickly finished and painted.  I used a mechanical HB pencil in all of the “grating” and I mimicked the wood on the tables using Tamiya’s buff and some brown oil paint.  This was the first time I attempted “wood grain” and I learned a lot from it. 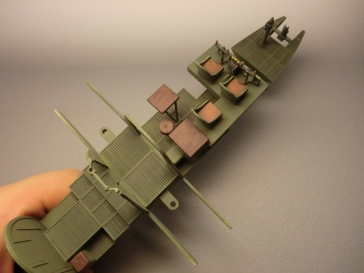 There is not much to tell you about this build.  It is simple and goes together quickly despite the size of the model.  I chose not to add anything to the model – this was a pure “out of box” build.  This is probably the main reason why I found myself priming the model so quickly after I started it.  The only issue I ran into was the fit of the canopy.  I should have taken more time to sand and fit it just right.  I felt I rushed this a little and I had to clamp down the canopy to get it to fit.  I bet with a little more work, it would have fit snugly on it own.

The canopy and the 10000 other windows were masked with an Eduard set.  I am very glad I bought it and I highly recommend it to anyone who wishes to avoid taking days to mask this beast! I decided to do some panel shading though you really have to look for it in the pictures.  Everything was painted with Tamiya acrylics as per the kit instructions.

Have you ever done a rescue build?

This model has done well for me at contests and was a blast to build.  Despite it being a relatively quick build with a simple finish, it is one of my favorites in the cabinet.  In terms of my rescues, this was by far the best one.

Have you bought a started kit or tried to rescue one?  What drew you to the started model?  What challenged you the most?  How did it turn out?  I’d love to hear about your rescues in the comments.