I have previously published a quick and dirty guide to modeling the many US variants of the Corsair in 1/48 scale.  In that last guide I detailed the differences between the variants as they were developed.   Instead of repeating that information, this guide will have a bit more information about the story behind the use of for these Corsairs by other nations.  One thing that stuck me in making this guide – the Corsair stuck around for a long time!  This was due to its ability to make the switch from being a front line fighter in its early years to being an excellent strike aircraft at the end.

Again, this guide is primarily aimed at 1/48 aircraft. However, if you model in other scales, you can still benefit from a lot of this information.

The Argentine Navy operated 26 F4U-5/5N/5NL Corsairs from 1956 to 1968 and as you can see, these are definitely some of the most attractive Corsairs to model.

First let’s get the variant naming sorted out:

It seems as though the Argentine Navy chose the surplus Corsair for no other reason than it was the best choice after the surplus Skyraider (those were going to the French Navy).  As for the -5 variant, this was chosen over the -4 because the airframes were newer and would require less work to become operational.

Once the Corsairs arrived in Argentina, pilots were immediately training with them on a simulated carrier deck with arresting gear.  Carrier operations started in 1959 off the  Independencia. During a civil revolt in April 1963, these Corsairs performed attacks in the proximity of Punta Indio and Magdalena in Argentina.

These Corsairs were imported to Argentina the old fashioned way: Ferry Flight.  At the time these were done, they were the longest Argentine Navy ferry flights ever.

Yes you can!  But it might be a bit of a commute.  There is a preserved F4U-5 at the Museo de Aviacion Naval, Bahia Blanca NAS.

When it comes to models of the -5 Corsair, you have some choice but it really comes down to choosing one of the many Hasegawa F4U-5 kits* or the much newer Hobby Boss -5.   It has been my experience that the Hasegawa kit (and that includes the Monogram Promodeller kit) is almost always available at a show or at a hobby store that has vintage stock.

And decals for Argentine Corsairs can be found here: 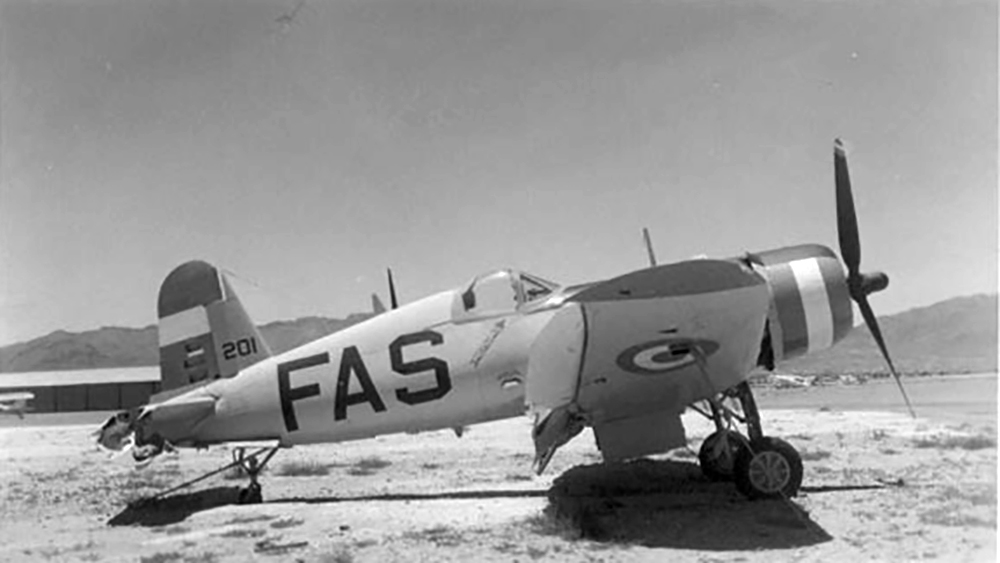 How did these Corsairs end up in El Salvador?

El Salvador purchased its Corsairs from the US through the “Military Assistance Sales” system. Of the first batch of twenty -1D Corsairs, fifteen were operational condition and the rest were designated for spare parts. These 15 aircraft were re-engined and delivered in mid-1957. Then in 1958, there was a further purchase of five disassembled Vought F4U-5 aircraft to be used as a source of spare parts to maintain the FG-1D fleet.  Only four arrived in the country and were never assigned any type of number.

Due to how expensive it was for the FAS to keep flying the entire fleet of Corsair planes,  10 of them were stored in hangars. By 1969 only six FG-1Ds remained in service and they were all retied by 1972.

The first acrobatic squadron of the FAS was formed with five Corsair planes painted blue and white. This squadron was presented in air shows throughout Central America from the late 1950s to the early 1960s.

At delivery two colour schemes were used, earlier aircraft being painted overall FS36440 light gull gray, with some later deliveries in FS15044 insignia blue. A number of aircraft received an overall white paint scheme for aerobatic displays in 1965, and for operations against Honduras, a camouflage consisting of two greens and a tan was applied to the upper surfaces.

The last dogfights between piston-engine, propeller-driven airplanes occurred in Central America in 1969, and all of the combatants were flying U.S.-built Corsairs and Mustangs.

The dogfights were among the final acts in a brief but bloody four-day conflict between Honduras and El Salvador, commonly (but misleadingly) known as the Football War or the Soccer War. Although a pair of soccer games between the two nations sparked the initial riots, the war was the culmination of longstanding tension over immigration and land reforms in the border area between the two countries.

The -1D is probably the most produced variant of the Corsair.  Naturally there are plenty of kit options here.  The Tamiya is tough to beat but don’t discount the Hobby Craft Corsair; It came out at roughly the same time as the Tamiya Corsairs and is almost as good:

One of my favorite Corsairs is the FAS Corsair in a very complicated camouflage pattern.  I can’t get enough of this one and it is definitely on the build radar: 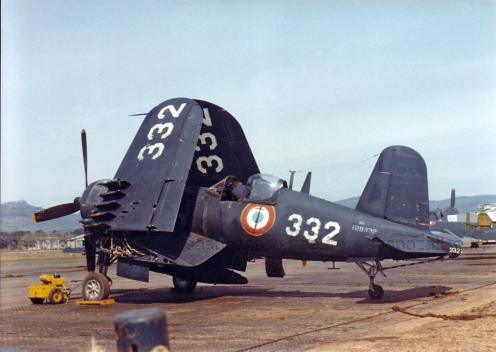 The AU-1 (renamed from the F4U-6) was designed as a low level ground support aircraft.  To make it more survivable at low lever, 25 pieces of armour were added to protect the cockpit, engine and fuel tanks.  Most of these were used by the Marines in Korea and were flown until 1957.  Of these Marine AU-1 Corsairs, 25 were loaned to the French Navy for use in Indochina.

The F4U-7 was the final Corsair variant.  It was made by replacing the engine in the AU-1 with the engine from the F4U-4.  This improved its high altitude performance.

The AU-1s were used by France in the battle of Dien Bien Phu.  After France pulled out of Indochina, these Corsairs were returned to the Marines.  The F4U-7 was used by France during the Suez crisis in 1956 as well as in combat operations in Algeria in 1962.  These -7s with the Suez invasion stripes make for one of the most attractive Corsair models to build.

The F4U-7 was the only Corsair built specifically for a country other than the US and the last one rolled off the production line in 1952.  However, given the young age of these Corsairs, many of them were later acquired privately by US owners.  I believe there are more F4U-7s in flying condition than any other variant.

There are also plenty of decal options out there for these kits. 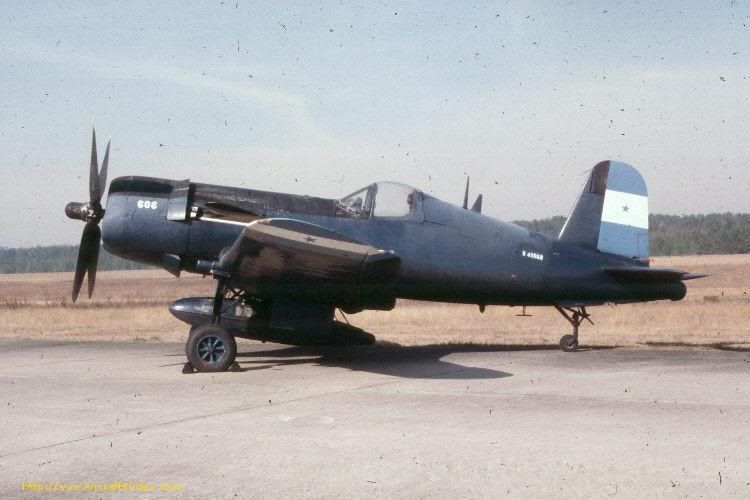 These were surplus F4U-4, F4U-5, and F4U-5N Corsairs bought privately and imported through American aid programs. Several of these had flown in the Korean War.  Frankly, there is not a lot of information out there about the Honduran Air Force or its Corsairs.  So it is hard to provide much detail other than the planes stayed overall Gloss Sea Blue with few other markings.

The Corsairs were based at the airport of Toncontin. During the Morocon Conflict with Nicaragua in 1957, Honduran fighters flew many patrols  along the common border, without seeing engagements with Nicaraguan counterparts.

Probably the most famous Honduran Airforce Pilot was Captain Fernando Soto.   He and his wingman came to the aid of a third Corsair pilot who’d been jumped by a pair of Salvadoran Mustangs.  He shot down one of those Mustangs.  Later that afternoon, Soto spotted two Salvadoran Corsairs. During his first diving pass, Soto flamed one of the FG-1Ds.  The second one was more of a challenge but after a brief dogfight, Soto shot it down too.

Yes you can! At the end of its service life, Soto’s airplane, FAH-609, was transferred to the Air Museum of Honduras. Its fuselage still carries the white silhouettes of three airplanes—two Corsairs and one Mustang.

Again, the -5 is widely available whether it is from the Hasegawa or Hobby Boss molds.

And decals for Honduran Corsairs can be found here:

New Zealand was the second largest foreign user of Corsairs during World War 2.  The Royal New Zealand Air Force received 424 Corsairs (which were a mix of F4U-1A, F4U-1D & FG-1D) under Lend Lease.

13 different New Zealand units used the Corsar in 1944-45. These “Kiwi” Corsairs flew exclusively from land bases and were first used in the ground attack role during campaigns in the Solomons and the Bismarck Islands.

12 Corsair units disbanded within months of the end of the war in the Pacific.  However, one Corsair squadron remained operational and based in Japan until the end of 1947.

Yes – but you have to travel a long way.  There is an airworthy -1D and a few Birdcages under restoration in New Zealand. 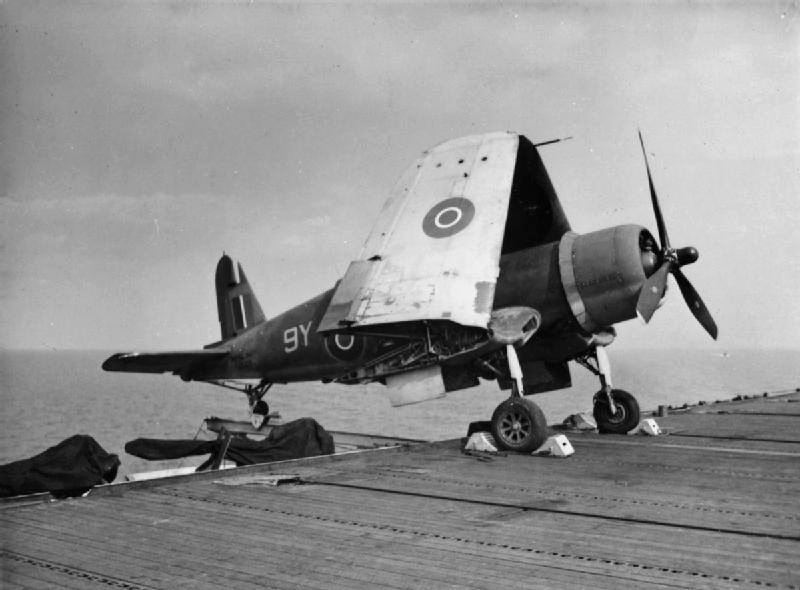 There is a lot to the history of the Corsair in the Fleet Air Arm and it deserves an article all on its own.  But to summarize, starting in 1943, the FAA operated 2,012 Corsairs of all types during World War 2:

What lead the Royal Navy to the Corsair was the need to have a capable fighter that was suited to the harsh conditions of carrier operations.  Efforts to modify the Hurricane and Spitfire were not successful in that these fighters were constantly broken.  Ultimately the Royal Navy would receive one of the best piston carrier fighters ever (the Sea Fury) but that would not be until the late stages of the war.  So in the meantime they chose the best thing available.

But remember, the early Corsairs had some teething problems of their own.  While these early Corsairs were getting the kinks ironed out in land based units for the US, the FAA were willing to take more risks with these fighters on their carriers.

They did need some changes though but one must really check their references:

The Birdcage first saw action in early 1943 and first shot down Japanese fighters on February 14, 1943.  The Birdcage was used operationally from land bases in the South Pacific.

The FAA Corsairs were the only ones to ever operate in the European theater of operations.  They were used on several raids against the Tirpitz (escorting torpedo bombers).  Although there were no engagements with the Luftwaffe, there is a legend that one of these Corsairs was shot down in the raid and was restored to flying condition by the Germans.  Information supporting this legend is spotty at best.

Up until very recently there was a flying example at Vintage Wings.  It is a reproduction FAA Corsair (originally a USN FG-1D) but it was involved in an accident upon landing.  I am not sure of its current status: 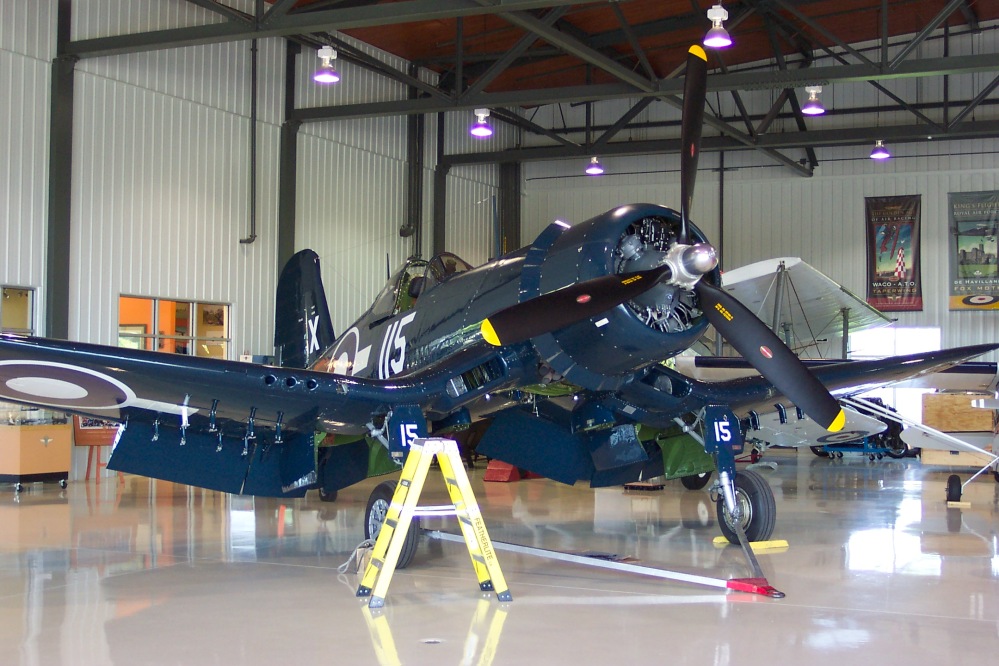 I built mine with the MDC Conversion Set for FAA Corsairs.

With over 30 years of operational use in several armed forces, we modelers have a lot of choice when it comes to the Corsair.  In some cases, this is an excellent excuse to make many, many Corsair models.  At this point I have 10 in 1/48th scale and I am not slowing down one bit.

For the sake of keeping a simple blog post within a reasonable length, I really glossed over the users and uses of these foreign operated Corsairs.  But these are worth a read if you are inclined.