Now I know what you are thinking: Are there model aircraft at a model car show?  Absolutely!  And I will get to that below, because there were some great ones!

The 6th Annual Ottawa Scale Auto Contest was held on a very rainy Sunday on October 27, 2019.  Since its inception in 2014, it has been held in various venues but it made the switch to the Holland Armory (an actual working Armory) in the south end of the city.

This is a “model club style” show hosted by the scale auto club that meets at the Hobby Centre.  There has always been a focus on the Auto categories and away from IPMS Style judging.  Winners are determined by popular vote (from fellow modelers) and there are 1-2-3 awards in each of the categories.

Sure it is a “smaller” show with limited non-auto categories, but it gets a lot of things right:

The registration process was painless and there was a category for Junior modelers to come out and compete.  This marks the first time my little one entered a model and she was very excited about it.

Aviation Models that Caught my Eye

This has always been an auto model contest but the organizers opened the non-auto categories somewhat this year. The result was a table chock full of excellent aircraft models as well as a few others sprinkled in other categories (juniors, judged and dioramas).   Here are a few that caught my eye:

I don’t get to see many Lindberg models at contests except at the rare vendor table.  I didn’t know they made a Gee Bee racer until I spoke with the builder.  Necessity is the mother of invention and in this case, it was a 2nd hand rescue build with no decal options.  So out came some bits to arm it, some olive drab was painted for an early war paint scheme and a mishmash of decals were used to complete this not-so-outlandish what-if.  What a great model.

There are some aircraft where, if you want to build one, you have to go get an AMT kit.  These would be the F7F Tigercat, the P-70 and the A-20 (there might be others).  I have an AMT F7F and to call it a “fixer upper” would be charitable: a ton of flash, misaligned molds, soft plastic.  I’m not saying AMT models are no good – but they need TLC to get good finishes.  I imagine a lot of love went into this this A-20.  I have a weakness for bare metal finishes and I love the finish on this one as well as the light weathering. 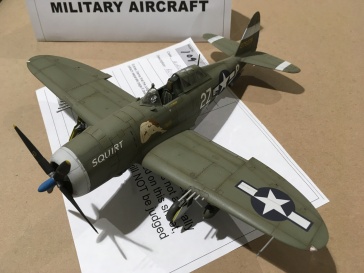 A clean, simple build with a nice fade to the olive drab paint.  I have a couple Tamiya Thunderbolts in the stash and they are great kits.  It’s about time I started one!

This is a recent re-issue of an old Revell kit.  Normally I would not pay any attention to this type of model but seeing is believing.  This is a value priced kit that is currently on the shelves.  Even at this small scale, the model is impressively large and it has just enough detail.  The builder told me the decals were excellent.  Sold.

The rest of the aircraft entries

Not as many as at an IPMS show but the quality was definitely up there.  Check these out: 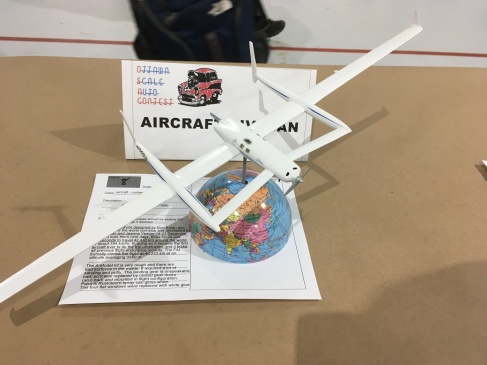 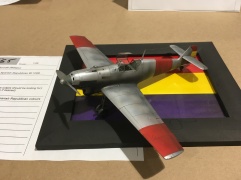 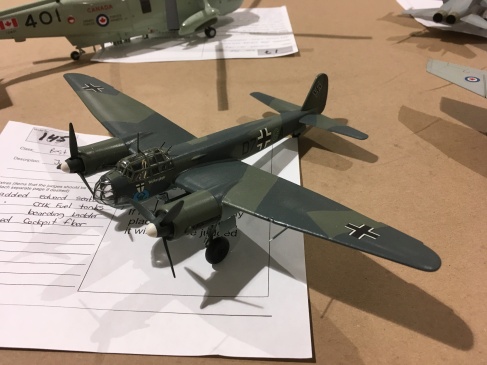 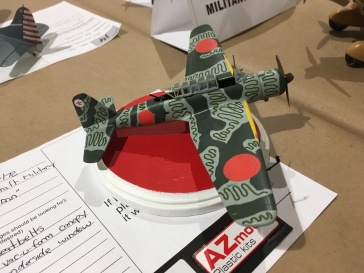 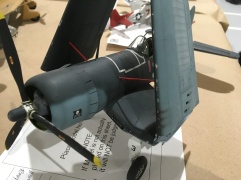 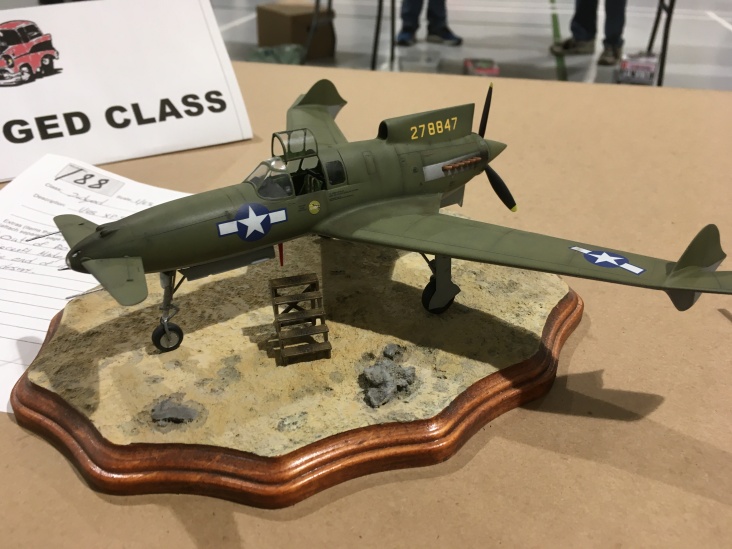 Some of the other models that caught my eye

I know there will be others posting about the car models.  The thing is, I know a lot of work goes into getting the perfect finish for auto models but I have a very hard time figuring out which models are “better” than the others in these categories.  I snapped a few pictures of the non-aircraft models that caught my eye.  I have to say, the guillotine was pretty much the most unique model I have ever seen at a show: 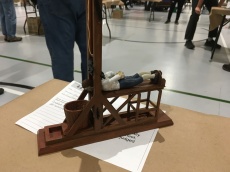 Well, there was one car that I thought looked pretty great and that was my daughter’s car!  “We” won this car in the raffle last year and she wanted to build it for this year’s contest….except it had to be purple!  We built this thing in phases over the summer and fall.  She got to use spray paint and glue for the first time.  It went together well and after some initial confusion about how model parts go together, she “got” the process quickly.  There was no way she was going to sit with this thing for more than 20 minutes at a time but it turns out that was perfect – because we got 4 mini sessions.  She enjoyed seeing it gradually come together and she is already talking about her next build.

Well there you have it: A club show that delivered a fun day meeting up with my model friends and one happy little girl.  A big thank you to the show organizers and we hope to be at the show again next year.

So what do you think of “voting” model shows?  I have been to a few and I do try to cast my ballot(s) but it can be difficult to be a good voter in categories where I have no clue (such as autos, ships & figures).  I usually throw a “peoples choice” vote at something I’ve never seen before which, I guess, may not be fair to someone who did an amazing job on a BF-109 or other popular subject.  Anyhow, I’d like to know what you think in the comments.